Crash is a sleep-aid supplement from Vices and Vibes (the same company that made the excellent Smack pre-workout). Its formula contains 1.5 g Inositol, 1 g Phenibut, 500 mg L-Tryptophan, 300 mg L-Theanine, and 5 mg Melatonin. Crash put me to sleep gradually, kept me asleep, and I woke up without any grogginess.

I recommend this to anyone who has previously taken a powdered sleep-aid since it’s not too strong and facilitates at least 7 hours of sleep.

Read on for additional details of my experience, the best prices for the Crash sleep-aid, and a breakdown of its ingredient label. 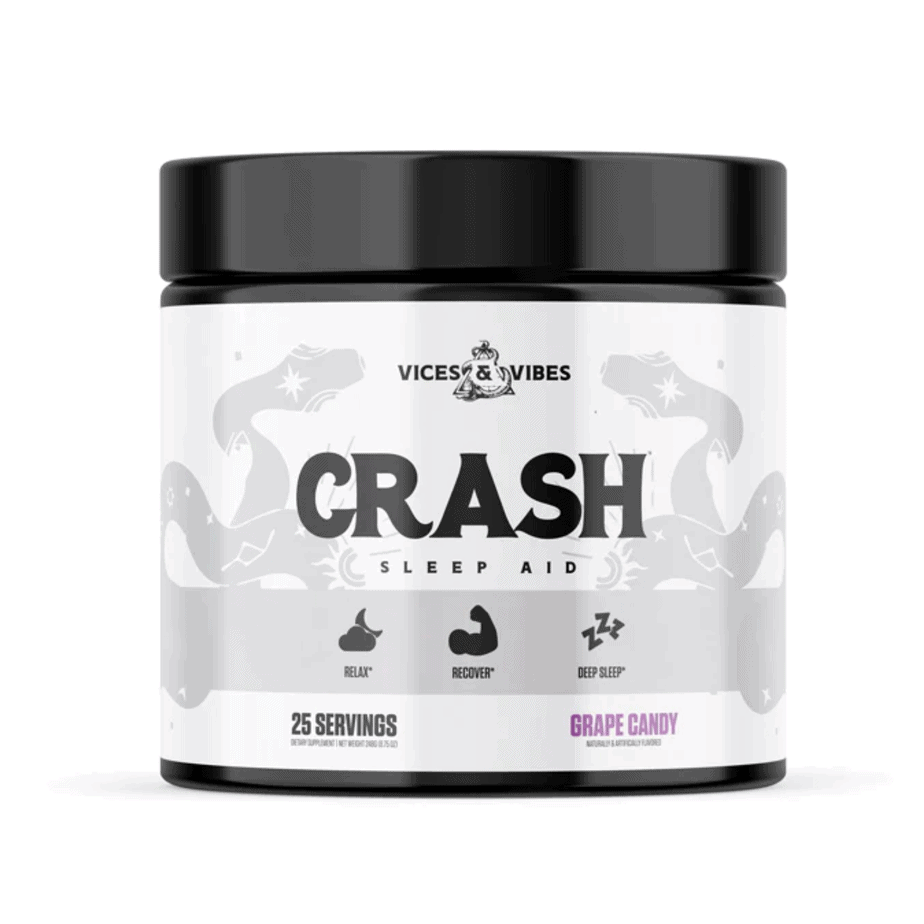 From feeling refreshed after waking up, sleeping throughout the entire night, and falling asleep into a relaxed lull, Crash is an incredible product.

Melatonin: 5 mg
L-Tyrptophan : 500 mg
L-Taurine: 1000 mg
Shop Supp Kingz Learn More
Lift Vault earns a commission if you click this link and make a purchase at no extra cost to you.

I took Crash four times throughout two weeks, twice before my day job, once before a workout, and once before a rest day. Every time I took it, I fell asleep quickly, stayed asleep, and woke up feeling well-rested.

Compared to other sleep aids (OTCs and other powders), Crash was most similar to Hibernate by Huge Supplements. Within 30 minutes, I felt a wave of relaxation and a sense of calm. Approximately 45 minutes later, my eyes felt heavy, my mind relaxed and cleared, and I fell asleep.

When I woke up, I felt rested. There was no grogginess, and any sedative effects from the product were gone by the time I woke up.

Even when I tried to sleep in, I could not sleep more than 9-10 hours as it would dissipate before I could sleep longer.

I tried the “Grape Candy” flavor, which was a very sweet, grape “Jolly Rancher” type of flavor. Because it was too sweet, I’d give it an 8.5 out of 10.

Glycine is one of three amino acids that your body uses to make glutathione, a powerful antioxidant that helps protect your cells against oxidative damage caused by free radicals, which are thought to contribute to many diseases.

One study uncovered that it has been linked to improving the quality of sleep. Another study showed that you need about a 3,000 mg serving, leaving Crash’s dosage slightly below the amount.

Inositol is a carbohydrate found naturally in citrus fruit and fiber-rich foods. Among other effects, it can help regulate mood and metabolism.

I assume it is included here for its ability to help reduce anxiety. However the study exploring its effect utilized an 18 gram daily serving of inositol.

So, is Inositol under-dosed in Crash? Not necessarily.

Another study observed 60 pregnant women over ten weeks and noted that a daily intake of 2 grams of inositol significantly improved sleep quality. These results make inositol an up-and-coming ingredient worthy of additional research.

This is the real star of the show.

Phenibut is a depressant used to treat anxiety, insomnia, and other conditions that depressants can help treat (e.g., alcohol withdrawal).

It can be used recreationally, incur a tolerance, and cause withdrawal. Then again, so can caffeine. If you have issues with substance abuse and addiction, phenibut is probably an ingredient you will want to stay away from.

It has a half-life of over 5 hours, so you’ll still have about ~25% of your initial dosage in your system after 10 hours. If you take too much, it’ll take a while to pass.

Taurine is a “miscellaneous” pre-workout ingredient with many potential, albeit limited, physical benefits. It can aid in blood flow, reduce cramping, and act as a booster to antioxidant defense systems (Examine). It’s a pretty insignificant ingredient in pre-workout compared to other components but doesn’t hurt anything.

One gram is a decent dosage of taurine to achieve any effects it has to offer. Usually, other products have 500 mg to 2 grams.

Tryptophan is an amino acid that is converted into 5-HTP, which in turn is converted to serotonin. Supplementing with tryptophan increases levels of 5-HTP and serotonin, improving mood.

Furthermore, serotonin can be converted into melatonin, which helps influence the body’s sleep-wake cycle.

According to Healthline, one study found that people who consumed 270 mg of chamomile extract twice daily for 28 days had 1/3 less nighttime awakening and fell asleep 15 minutes faster than those who did not consume the extract (NCBI).

There is some evidence that chamomile may reduce the severity of anxiety and depression, but this is mainly based on its application in aromatherapy or as a supplement (NCBI, NCBI, NCBI, NCBI).

Lemon balm (Melissa officinalis) is a lemon-scented herb from the same family as mint. The herb is native to Europe, North Africa, and West Asia, but it’s grown worldwide.

Although this was a double-blind, placebo-controlled study, it had a small sample size of 18 people.

Additional research published in 2014 examined foods containing lemon balm’s mood and cognitive effects. The supplement was mixed into a beverage and yogurt with natural or artificial sweeteners. Participants in both groups reported positive effects on various aspects of mood, including reduced anxiety levels.

Although this is promising, more research is needed to determine its efficacy.

The recommended dose is between 300 mg twice a day and 600 mg three times a day. The 150 mg serving in Crash far below this amount, but at a 4:1 extract, it would be equivalent to 600 mg, thus putting Crash within the acceptable dose.

Research suggests that breathing in lavender aroma could improve sleep quality. A systematic review of 15 studies from 2014 found that inhaling essential oils, including lavender, had positive effects on people with mild sleep disturbances.

Research from 2015 showed that people who used lavender aromatherapy felt more refreshed upon waking. Another 2010 study on people with anxiety disorders revealed that orally administered lavender oil helped them sleep longer at night.

Lavender may also provide support for people with anxiety.

One from 2015 involved 60 people in a coronary intensive care unit. The researchers found that those treated with lavender essential oil had lower anxiety levels and better sleep.

Another study from 2010 compared lavender capsules to the anti-anxiety medication lorazepam, concluding that lavender’s effects were comparable to the prescription drug. Doses are not known with the lavender extract, just with aromatherapy and capsules.

AstraGin is a patented ingredient that aids the absorption of pre-workout ingredients. This is similar to the patented version of black pepper without the peppery taste or smell. Its dose usually ranges between 25 and 50 mg.

Melatonin is a hormone naturally produced in the body to induce sleep.

Melatonin is released in response to darkness and is suppressed by light. As the sun goes down and darkness increases, the pineal gland begins to secrete melatonin, which usually happens after 9 p.m. The increased levels of melatonin in the blood send signals to the brain to reduce alertness, and you feel sleepy.

Melatonin secretion peaks in the middle of the night (between 2 and 4 in the morning) and decreases gradually during the night’s second half. Nearly 80 percent of melatonin is synthesized at night (Medicine Net)

Typical sleep products use 1 mg upwards to 10 mg, putting Crash in the middle.

From feeling refreshed after waking up, sleeping throughout the entire night, and falling asleep into a relaxed lull, Crash is an incredible product.

Melatonin: 5 mg
L-Tyrptophan : 500 mg
L-Taurine: 1000 mg
Shop Supp Kingz Learn More
Lift Vault earns a commission if you click this link and make a purchase at no extra cost to you.

Crash by Vices and Vibes

Crash by Vices and Vibes is a powdered sleep-aid formula. Compared to others, it has become one of my go-to products. From feeling refreshed after waking up, sleeping throughout the entire night, and falling asleep into a relaxed lull, Crash is an incredible product.