Created and shared by /u/Kroamatik as a “generic 10 week program” structured around 4 days per week. It is designed to be started 10 weeks out from a competition or a max testing week (so the competition occurs during week 10).

It follows a pretty standard approach of benching 3x per week, squatting 2x per week, and deadlifting 1x per week (deadlifting 2x weekly if you count paused deadlifts – which I would). Some variations on the competition lifts are included, along with minor accessory work. As this is primarily a meet prep program, there isn’t a ton of exercise variation and the bulk of the work is on competition lifts and close variants.

It is RPE based, so it’s important to familiarize yourself with the principles of RPE before running the program. If you’ve never run an RPE program before, don’t be intimidated. You’ll probably misjudge some RPE’s at first, but you’ll get the hang of it after a training cycle and after that it can be a helpful way to train. 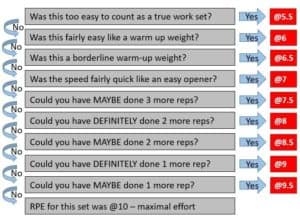 Have feedback or a feature request? Let me know on this easy Google Form.