Cannibal Inferno is a fat burning supplement from Chaos and Pain. It has a fairly loaded label powered by 650 mg ALCAR, 300 mg Caffeine, 75 mg Synephrine, 50 mg Grains of Paradise, 30 mg ProGBB, and 3 mg Yohimbine HCL, among other ingredients.

Over the course of a week, I tried Cannibal Inferno three times.

I’d recommend this for anyone who likes to sweat, and can handle 300 mg of caffeine (the same amount as Raze, Bang, and Reign energy drinks).

Read on for additional details of my experience, the best prices for the Cannibal Inferno by Chaos and Pain, and a breakdown of its ingredient label. 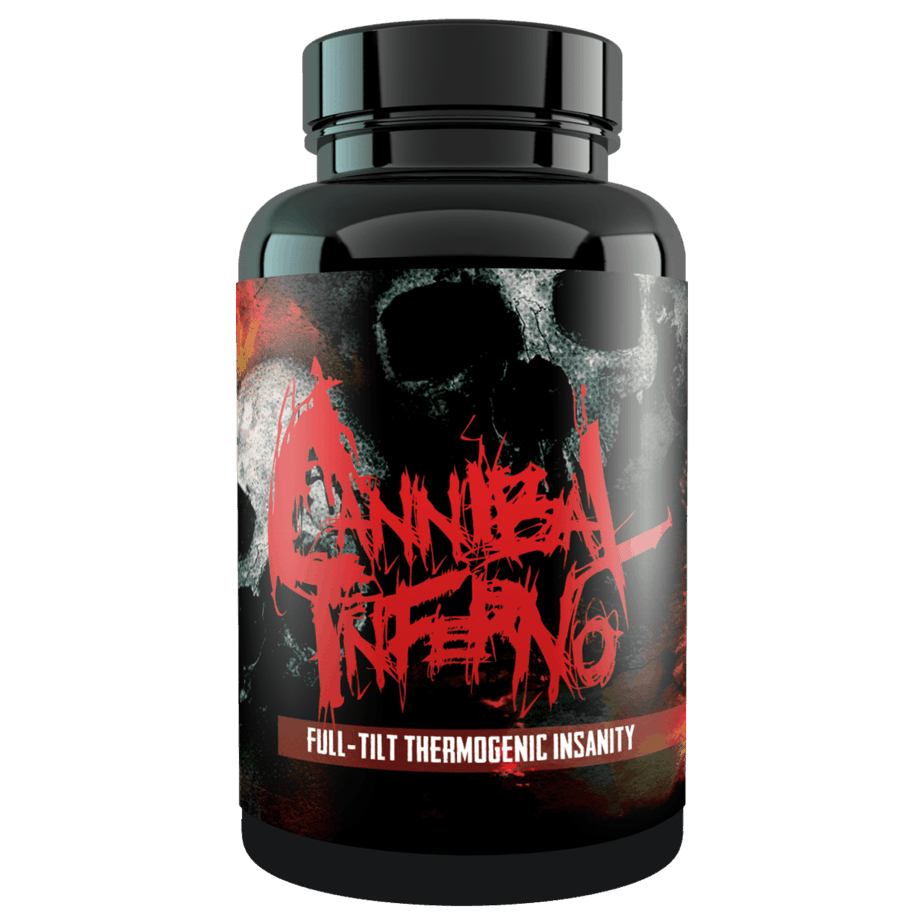 Cannibal Inferno by Chaos and Pain is a strong fat burning supplement. Focusing on energy and strong thermogenic properties, this product will make you sweat.

Recommended for anyone who can take 300 mg of caffeine and wants to sweat with energy.

Grains of Paradise: 50 mg
Caffeine: 300 mg
Shop Chaos and Pain
Lift Vault earns a commission if you click this link and make a purchase at no extra cost to you.

My Experience with Cannibal Inferno

Within 10-15 minutes, the energy came on and felt strong for the first 30-40 minutes, but felt smooth afterwards. The energy lasted for a good 2-3 hours on two capsules, and 3-4 hours on three. Personally, I have a preference for two capsules over three capsules as the energy was a little more intense

Within 20-25 minutes, or 5-10 of warm-up, you start to sweat. The thermogenic effects on Cannibal Inferno are very strong and keep building.

Focus is alright, but not very strong, same with the mood elevation.

Luckily no side effects were apparent.

Even at three capsules, they were easy to swallow with a sip of water.

Full serving is three capsules, and luckily not that big as each capsule is roughly two millimeters long.

Where to buy it:

Below you’ll find the ingredient label for Cannibal Inferno, along with a complete breakdown of each ingredient and its dosage.

Chromium is an essential mineral that regulates the metabolism of glucose. It also plays a role in regulating insulin sensitivity.

It has been shown to create a minor reduction in blood glucose in diabetics, but this effect is not observed in people without diabetes (National Institute of Health).

From PubMed, In an 8-week study, 1,000 μg/day of chromium (in the form of chromium picolinate) reduced food intake, hunger and cravings in healthy overweight women.

In an 8-week study from The Journal of Psychiatric Practice, they assigned 113 people with depression to receive either 600 μg/day of chromium in the form of chromium picolinate or a placebo.

The researchers found that appetite and cravings were reduced with chromium picolinate supplements, compared to the placebo.

Specifically, doses of 600 to 1,000 μg/day may have led to reductions in the frequency of binge eating episodes and symptoms of depression

Remembering that 150 mcg is 150,000 nanogram (or μg), this is a very strong dose for the potential effects.

Ginger is a flowering plant that originated in Southeast Asia. It’s among the healthiest (and most delicious) spices on the planet.

It belongs to the Zingiberaceae family, and it’s closely related to turmeric, cardamom, and galangal.

The rhizome (underground part of the stem) is the part commonly used as a spice. It’s often called ginger root or, simply, ginger.

Ginger can be used fresh, dried, powdered, or as an oil or juice. It’s a very common ingredient in recipes. It’s sometimes added to processed foods and cosmetics as well.

As per this study, it concluded that ginger supplementation significantly reduced body weight, the waist-to-hip ratio, and the hip ratio in people with overweight or obesity.

It may also help with inflammation as this study concludes.

However, the 600 mg per serving may be too low, as a third study which concluded significant reductions in BMI were observed, but at 2 grams a day.

The Grand-Daddy of stimulant supplements. It’s in your coffee, your tea, soda, heck, it may even be in your sweets and gum (some confectioners add caffeine to their sweets (such as chocolate) for a kick). Well known for increasing energy, power, and focus, it’s the staple ingredient in all stim-based products.

Personally, for me, 300 mg per serving is fairly high for a fat burner, and is on the upper end of fat burning doses of caffeine.

Grapefruit seed extract is made from the seeds of grapefruit (Citrus x paradisi). This popular product is used as a natural remedy for a number of health problems, including infections and other skin concerns. Also known as GSE, grapefruit seed extract is often used as an ingredient in personal-care products. It is sold as a liquid and in dietary supplement (tablet or capsule) forms.

From Examine.com, there appears to be a weight reducing effect of grapefruit consumption relative to isocaloric controls, so it may do well with appetite suppression, which I definitely felt.

A clinical dosage of it would start at 240 mg and go as high as 600 mg. As such, this ingredient appears to be underdosed in Cannibal Inferno.

50 mg of synephrine is a solid dosage for fat burning effects. One note, it should be HCl (HydroChloride, with H for Hydrogen and Cl for Chloride) and not HCL.

Grains of Paradise has some very promising research around it, but still needs additional evidence to support its fat loss effects. With that said, there is some interesting research that shows it can activate brown adipose tissue, which can help increase a body’s metabolism and lead to increased weight loss.

Cannibal Inferno uses the patented form of Grains of Paradise, the same kind used in clinical trials. Being that Cannibal Inferno gives you 50 mg, it’s a 25% increase in the amount used in the study.

Gamma-Butyrobetaine Ethyl Ester Chloride (GBB) is a molecule that is converted to carnitine in the body. This process can support fat loss and the increase of body temperature.

In other words: you’re going to sweat.

30 mg is within the recommended range for GBB.

CapsiAstra is the trademark version of Dihydrocapsiate from Sweet Peppers.

Per this study, over the course of 28 days, it increased resting metabolic rate (RMR) (aka sitting around and still burning calories) at  3 mg and 9 mg dosages. It actually shows that for thermogenic effect, it’s best dosed at 3 mg putting Cannibal Inferno at that sweet spot.

“Yohimbine’s ability to block the alpha-2 adrenergic receptors located in fat cells could, in theory, lead to increased fat loss and weight loss. Several controlled studies have evaluated this and found mixed results.”

3 mg is a decent dosage compared to most fat burning and pre workout supplements.

Cannibal Inferno by Chaos and Pain is a strong fat burning supplement. Focusing on energy and strong thermogenic properties, this product will make you sweat.

Recommended for anyone who can take 300 mg of caffeine and wants to sweat with energy.

Grains of Paradise: 50 mg
Caffeine: 300 mg
Shop Chaos and Pain
Lift Vault earns a commission if you click this link and make a purchase at no extra cost to you.

Cannibal Inferno by Chaos and Pain is a strong fat burning supplement. Focusing on energy and strong thermogenic properties, this product will make you sweat. Powered by 650 mg ALCAR, 600 mg Ginger Extract, 300 mg Caffeine, 75 mg Synephrine, 50 mg Paradoxine, 30 mg ProGBB, this will warm you up. Cannibal Inferno is recommended for anyone who can take 300 mg of caffeine and wants to sweat with energy.