Home » Resources » How Much Creatine is in Bang Energy Drinks?

Bang energy drinks have gained recent popularity among lifters. They have set themselves apart from other energy drinks by including essential amino acids and super creatine.

But what is super creatine?

Is super creatine used by the body in the same way as creatine?

Is there enough creatine in Bang to support your training goals, or is it just a marketing ploy?

We’ll address all of these questions below.

How much creatine is in Bang?

Bang energy drinks do not contain any creatine. Instead, Bang contains super creatine, aka creatyl-l-leucine, a form of creatine bonded to leucine. There is about 5 mg of super creatine in Bang.

How do we know this?

The Food and Drug Administration requires ingredients to be listed in descending order of weight. We can use this requirement to infer the amount of super creatine based on the dosages of ingredients listed alongside super creatine.

For reference, here’s the ingredient label for Bang:

No. Bang energy drinks do not contain creatine.

Instead, they use a proprietary blend called super creatine or creatyl-l-leucine.

Bang energy drinks claim its product is unique because of the presence of super creatine. Still, super creatine is not a bioavailable form of creatine.

Super creatine has not been shown to yield benefits for health, muscle mass, or muscle growth. There is not enough creatine in Bang energy drinks to yield health benefits.

In reality, most of these health claims are not supported by research. Bang energy drinks contain trace amounts of super creatine. Super creatine has not been found to be a suitable substitute for creatine monohydrate.

By including super creatine, VPX is using a marketing tactic known as “pixie dusting.” Pixie dusting involves using just enough of an ingredient to list it on the packaging. By including trace amounts of creatyl-l-leucine, Bang can market the benefits of creatine without actually including it in significant amounts.

Bang claims that its small amounts of super creatine improve mental concentration and boosts performance. The claim that super creatine is better able to cross the blood-brain barrier is not supported by the Food and Drug Administration (FDA).

Creatine is one of the most well-researched and popular training supplements. How much creatine you need depends on your goals and how you respond to creatine supplementation.

The daily safe amount of creatine monohydrate you can consume per day is 5 grams. Creatine has been well-researched for its ability to improve strength and power output during resistance training. Creatine supplementation also increases lean muscle mass, anaerobic running capacity, and may boost brain function and reduce mental fatigue.

Creatine works by boosting the phosphocreatine stores in your muscles. These stores can be used to produce more ATP, the essential energy source during intense exercise. Increased ATP production can boost exercise performance and recovery.

What is super creatine?

A study from the University of Manitoba found that creatyl-l-leucine (super creatine) is not a bioavailable form of creatine and did not lead to bioaccumulation of creatine in muscle cells, brain, or plasma tissue.

There is nothing special or unique about Bang energy drinks despite the inclusion of trace amounts of super creatine.

Bang energy drink contains zero calories, is sugar-free, and has some branched-chain amino acids. Bang energy drinks are suitable if you like the taste and enjoy the energy boost.

Despite its marketing claims, Bang energy drink ingredients are similar to those in other energy drink brands.

How much caffeine is in Bang?

Consuming too much caffeine can have negative side effects. A single 16-oz can of Bang has a caffeine content of 300 mg.

Bang is one of the strongest energy drinks in terms of caffeine content. The FDA recommends a maximum daily caffeine limit of 400 mg per day.

Is Bang worth it?

If you’re buying it to get the benefits of creatine, it is not worth it. Bang energy drinks contain no significant amounts of creatine. If you enjoy the taste and caffeine boost you get from drinking Bang, you can continue drinking it. 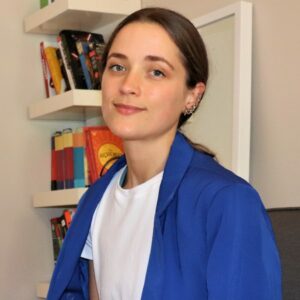 Emma is a Health Science graduate, qualified personal trainer, and writer. She has over ten years of experience in the health, community development, and communications sectors. She is passionate about making reputable information about health, fitness, and resistance training accessible to all.

Emma loves building her own functional strength and fitness outside of work with various training styles, from weightlifting to calisthenics, yoga, and dancing. She advocates for the powerful potential of exercise to improve physical, mental, and emotional health and well-being.