Leanadrene is a fat burner supplement from New Dimension. It’s another underground product, with no website for the company available.

Leanadrene has a rather simple, yet effective formula with a half prop blend, half open-label. Powered by 100 mg Caffeine and 100 mg DMHA, among others, this one surprised me in a good way. Anytime an underground product doesn’t make me crash and feel good or at least decent, I am pleasantly surprised.

I took this twice, and it is recommended for those who can handle their exotic stims while also wanting to lower their caffeine tolerance, but it still may be too strong for newcomers.

Based on the effects at one capsule, this will be on my rotation of products to take while doing fasted cardio.

Read on for additional details of my experience, the best prices for the Leanadrene fat burner, and a breakdown of its ingredient label. 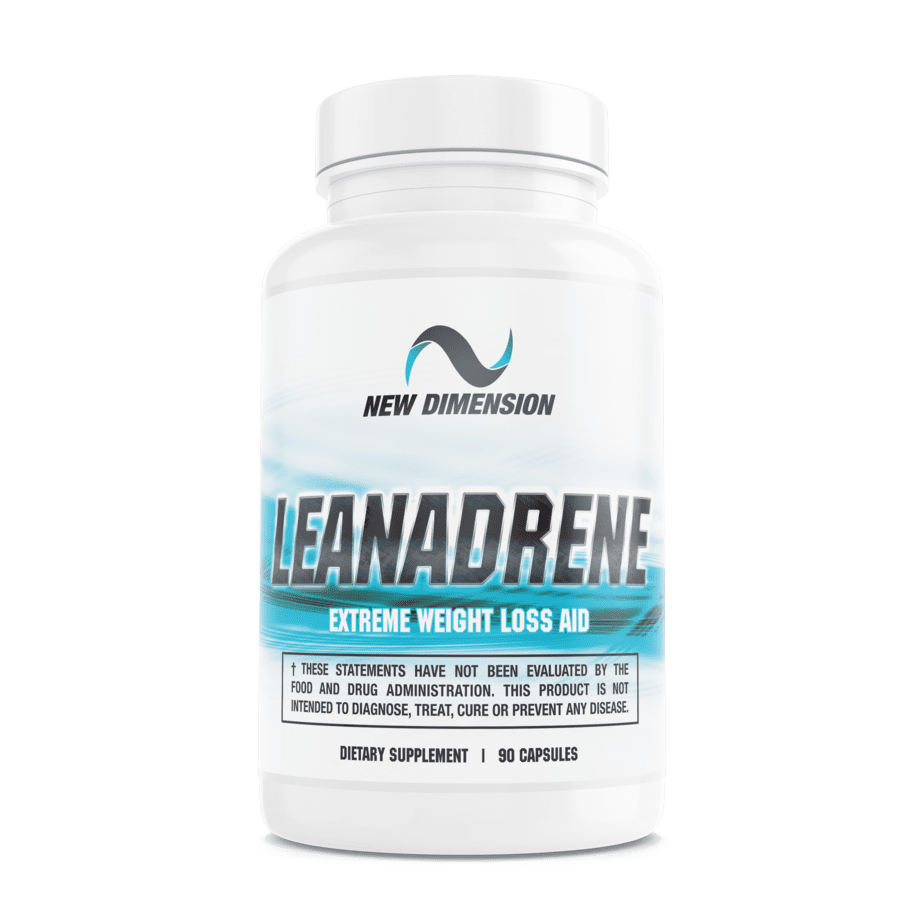 Leanadrene is a euphoric fat loss aid for those seeking a lower caffeine dosage with DMHA.

Caffeine: 100 mg
DMHA: 100 mg
Serving size: 1 capsule
Servings: 90
Shop Muscle Factory SC
Lift Vault earns a commission if you click this link and make a purchase at no extra cost to you.

You can purchase Leanadrene Fat Burner from the following retailers:

I took Leanadrene twice, once with one capsule and the other time with two capsules, as in the directions it says to “take 1-2 capsules in the morning and one capsule after lunch”.

With most fat burners, you want four things; Energy, mood, sweating, and appetite suppression. You usually take fat burners when you are cutting, and while cutting, you are in a bad mood, hungry, and low on energy.

Energy came on smooth and rose, starting after 15 minutes and lasting for a good 3+ hours.

Focus was nice and sorta sneaked up on me, started after 20 minutes.

Mood elevation was significant; I was singing to my music, moving, and felt it after about 25 minutes.

The thermogenic effect started after 20 minutes but wasn’t overbearing where you felt as if I’d melt.

The energy was sooner and rose much faster, starting after just 10 minutes and lasted for about 4 hours.

Focus started sooner and was far stronger on 2 caps, starting after 15 minutes.

Mood elevation was slightly less, but significant (due to the stronger focus)

Thermogenic effects were taken up a huge notch more. After a good 30 minutes, I was sweating bullets.

Even at 2 capsules, it was easy to swallow at just 2 mm per capsule.

A full serving is one capsule at only about 2 mm in size and a nice blue color, reminiscent of blue Mike & Ike candies.

The first part of the formula is a prop blend of only 122 mg with Bauhinia Purpurea Extract (Leaf and Pod), Bacopa Monnieri Extract (Leaf), Cirsium Oligophyllum Extract (whole plant), and Yohimbine HCL.

The listed amounts are per serving, which is one capsule. I experimented with taking this dosage as well as a double, two capsule dosage.

Bauhinia purpurea extract is included here as a metabolic booster.  This is an anti-ulcer ingredient traditionally used as an anti-ulcer treatment. However, it has been shown in at least one study to increase concentrations of T3 and T4 hormones produced by the thyroid. Among other things, these hormones help control metabolism. This is the same compound found in the notorious Excelsior and Thermal Spark products.

Bacopa monnieri is an herb that may reduce stress & anxiety as well as improve brain function. While some exciting research around its usage as a supplement, further research is needed to understand its effects better.

Coming from the thistle plants, this is another unusual ingredient in supplements, with limited (but promising) research for fat reduction.

This study, on animals, enhanced the slimming effect of caffeine. It didn’t reduce food intake but reduced subcutaneous fat by 26.2 percent over 32 days.

“Yohimbine’s ability to block the alpha-2 adrenergic receptors located in fat cells could, in theory, lead to increased fat loss and weight loss. Several controlled studies have evaluated this and found mixed results.”

5 mg is a proper dosage compared to most fat-burning and pre workout supplements, but I am unsure of the actual dose in Leanadrene.

From Examine, “Garcinia Cambogia (Malabar Tamarind) is a small fruit that has some traditional usage to enhance the culinary experience of a meal, but beyond that, has limited medicinal usage. The mechanism of action is inhibiting an enzyme called Citric acid lysase, which is required to synthesize fatty acids, known as de novo lipogenesis. At least in rats, evidence of suppressed de novo lipogenesis has been noted, and oral consumption of (-)-Hydroxycitric acid appears to reliably reduce food intake and body weight (the latter to a degree where food intake cannot explain all the observed effects)”.

That being said, studies in humans fail to replicate this. Some isolated studies do note weight loss, but it appears to be quite variable and unreliable.

100 mg is a pretty low dose; however, just because it says something on the label doesn’t necessarily mean you’ll “feel” it. You will feel it here, as it may be one of the reasons for the mood elevation.

I’m glad that they disclose the caffeine and DMHA amounts, as many people want to assess those amounts.

Leanadrene is a euphoric fat loss aid for those seeking a lower caffeine dosage with DMHA.

Caffeine: 100 mg
DMHA: 100 mg
Serving size: 1 capsule
Servings: 90
Shop Muscle Factory SC
Lift Vault earns a commission if you click this link and make a purchase at no extra cost to you.

Leanadrene is a mood-elevating, energy-manifesting, fat burner supplement that is low on caffeine with DMHA. Powered by 100 mg Caffeine, 100 mg DMHA, and a prop blend, you’ll feel good while sweating. It is recommended for those who can handle their exotic stims while lowering their caffeine tolerance, but still might be too intense for newcomers.