Fuze is a pre-workout supplement from New Dimension. Another underground product, with no website for the company available. Containing 400 mg of caffeine, 100 mg of synephrine, and 100 mg of DMAA. It also has one weird prop blend.

Fuze is recommended for those who can take their stims. If you prioritize energy in your pre workouts, then you may enjoy Fuze. If euphoria is what you’re after, then Fuze will probably leave you disappointed. Instead, Enjoy the Insanity or Light Year may be a better choice for euphoria-seekers.

Read on for additional details of my experience, the best prices for the Fuze pre-workout, and a breakdown of its ingredient label. 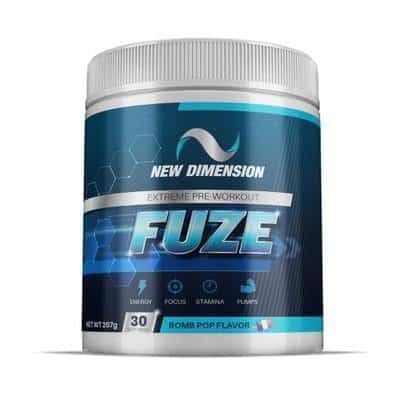 Caffeine: 400 mg
Main Effects: Energy
DMAA: 100 mg
Shop Muscle Factory SC
Lift Vault earns a commission if you click this link and make a purchase at no extra cost to you.

I took Fuze just once, but honestly, this surprised me.

The first thing in most pre-workouts that you feel is the Beta Alanine. But with this, the tingles did start within 10 minutes, but only lasted a few minutes and weren’t strong at all, felt much weaker. So, if you don’t like the beta alanine tingles, this is a high-stim PWO for you.

Within 20-25 minutes, a sense of urgency and energy came over me. It was a stable energy without that sorta “cracked-out” feeling some other DMAA products give you.

The thermogenic effects were strong with this one, making me sweat and drink even more water than normal during my workout.

Mood elevation was there, but it wasn’t very strong or highly euphoric.

After about 2 hours, the energy started to slightly taper off, but even after 6+ hours, I still felt energized, albeit not at the same levels previously.

Pumps definitely were lacking, but then again this isn’t a product based around pumps (though on the front of the tub it does advertise it)

Even though this was a high stim product from an underground brand, it had zero side effects. No stomach issues, crash, dizziness, etc.

I had Orange flavor, it wasn’t bad. The flavor was tolerable, reminding me of orange cough syrup I tried as a kid. A definite chemical taste is present. Out of 10, I’d say about 5 or so. Other flavors include Bomb Pop.

Where to Buy Fuze Pre Workout

You can buy Fuze Pre Workout from the following retailers:

Acute effects include energy, focus, enhanced sports performance, and possibly even a will to live. Okay, I added that last one.

400 mg is a fairly high dose. But the energy was strong and there was no crash.

100 mg of synephrine is a fairly high dosage for fat burning effects. You most definitely feel it in Fuze.

DMAA, aka 1,3-dimethylamylamine and 1,3 DMAA, is a stimulant that induces feelings of energy, euphoria, and motivation in its users. After coming under scrutiny from the FDA around 2015, there were a few years where DMAA disappeared from pre workouts. 100 mg is a fairly high dosage.

One of the biggest issues many supplement users have is proprietary/prop blends.And this product has one and a weird one. It is listed as Agmatine Sulfate, Hordenine, Beta Alanine, and then Taurine. Most labels are listed from highest to lowest, which I don’t think is the case here. Trying to extrapolate, I’d have to guess it was 3 g Beta Alanine, 1.5 g Taurine, 1 g Agmatine Sulfate, and 50 mg Hordenine.

Agmatine is included as a “pump” ingredient, but research is more limited on this ingredient vs. the classic L-Citrulline. Typical doses occasionally range between 500 mg and 1,500 mg.

Hordenine (N,N-dimethyltyramine) is a stimulant that is often included in recent “nootropic” products. It is not widely researched, so much of the information available comes from anecdotal accounts. Typically dosed between 10 mg and upwards of 150 mg, with an unknown dosage. There is one study that shows that Hordenine is an MAO (monoamine oxidase) inhibitor which may lengthen the feeling of energy and mood elevation. One odd thing is that it’s HCl as in “Hydro Chloride” (the Chloride is Cl, with a lowercase L, and not an uppercase i).

This is the standard dosage for beta alanine, which, taken consistently, has been shown to improve muscular endurance by acting as a lactic acid buffer in muscles. This is the ingredient that gives you the “tingles.” Usual doses range between 3 grams and 4 grams.

Taurine is often included in energy drinks and pre workouts after gaining notoriety from its inclusion in Red Bull. It can aid in blood flow, reduce cramping, and act as a booster to anti-oxidant defense systems (Examine). It’s a pretty insignificant ingredient in pre workout, but doesn’t hurt anything either. Most typical doses range between 1 grams and 3 grams.

Caffeine: 400 mg
Main Effects: Energy
DMAA: 100 mg
Shop Muscle Factory SC
Lift Vault earns a commission if you click this link and make a purchase at no extra cost to you.

Fuze delivers solid energy and focus, but not much euphoria. Even though it is an underground product, it performed VERY well for me. Powered by 400 mg caffeine, 100 mg DMAA, and 100 mg Synephrine, it was only lacking in pumps. Definitely recommended for stim junkies.