If you want an excellent pre-workout supplement without having to worry about what you’re putting into your body, then you came the right place.

We’ve painstakingly reviewed dozens of pre-workouts to identify the cream of the crop with no artificial sweeteners. Sucralose, aspartame, and saccharine are nowhere to be found in these pre workouts.

We think Lean Pre-Workout by Transparent Labs is the best option, but if you don’t care for caffeine, there are plenty of other pre-workouts available that are artificial sweetener-free. 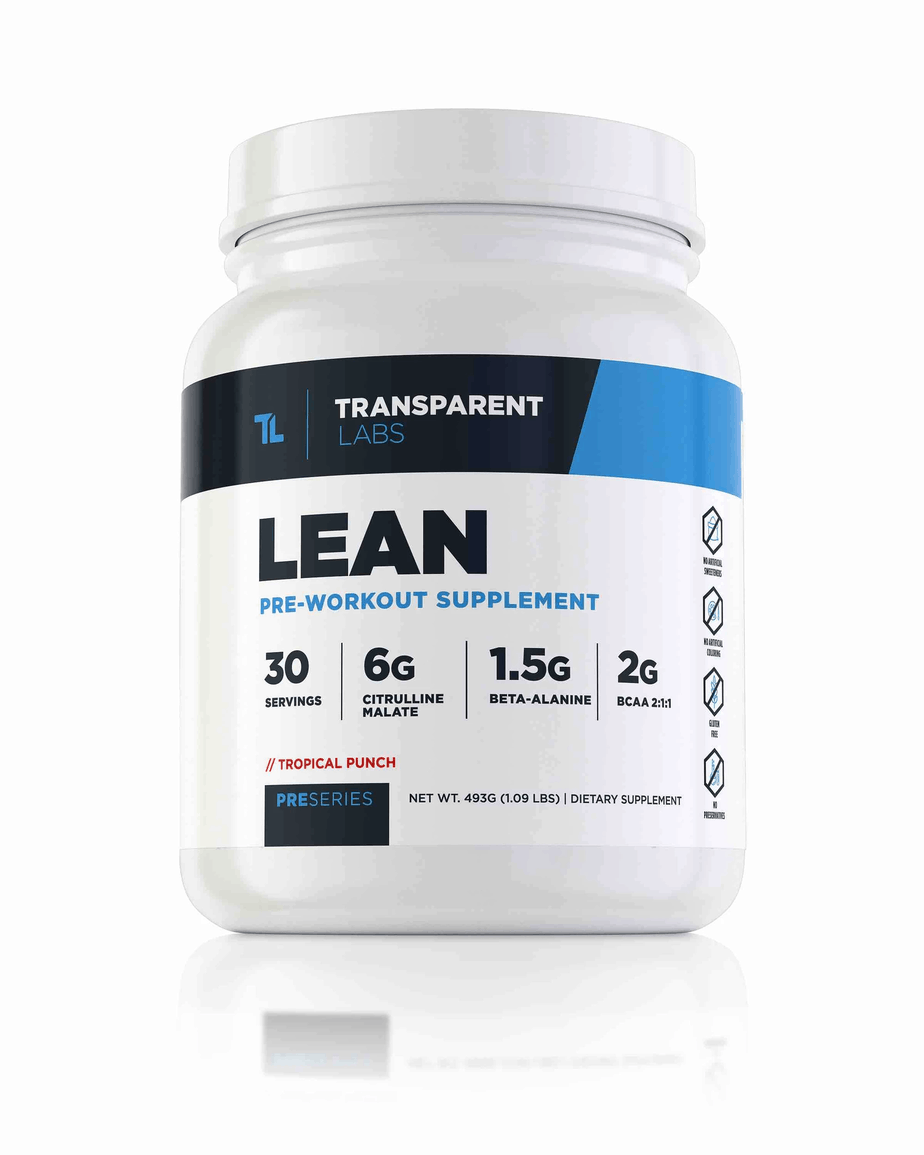 Lean Pre-Workout is a great choice for those seeking all-around nutrition support and a little extra fat-burning help. It's a well-rounded pre-workout that can be good choice for lots of different use cases.

In order for a pre workout supplement to qualify for this list, it must meet the following criteria:

Lean Pre-Workout is a great choice for those seeking all-around nutrition support and a little extra fat-burning help. It's a well-rounded pre-workout that can be good choice for lots of different use cases.

Here are some highlights of Lean Pre-Workout by Transparent Labs:

If high caffeine pre-workouts make you feel jittery and out of control, but you still want something to get you going, Transparent Labs Lean Pre-Workout might be ideal.

It contains medium levels of caffeine along with L-theanine, which can blunt jittery effects. Plus, it has Betaine, a compound found in beets that research shows can improve endurance. 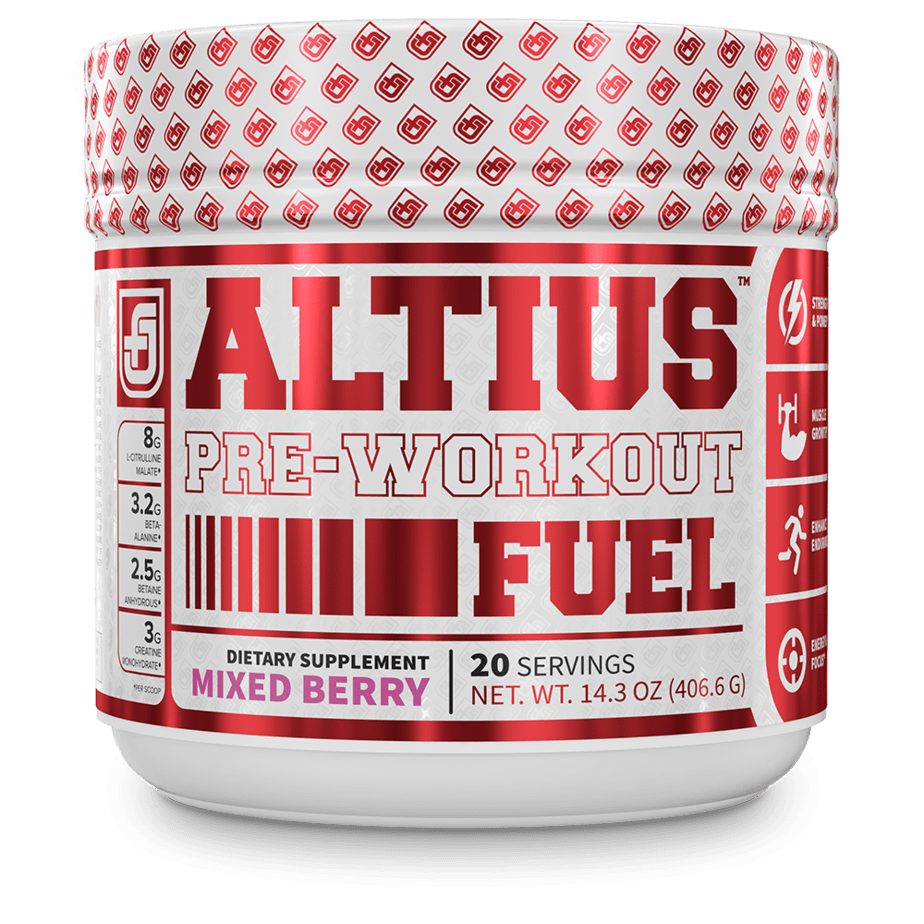 Altius is a clinically-dosed, "No BS" pre workout without any artificial sweeteners or unnecessary filler ingredients.

It's is a great choice for those seeking a strong burst of energy without any banned ingredients or shady stimulants.

With a fully transparent label, 325 mg of caffeine, and 8 g of citrulline malate, it packs a solid punch.

Caffeine: 325 mg
Sweetener(s): Stevia Extract
Shop Jacked Factory
Lift Vault earns a commission if you click this link and make a purchase at no extra cost to you.

Altius by Jacked Factory is our top pick for an artificial sweetener-free pre-workout that still offers a massive dose of caffeine. L-citrulline malate will give you the aesthetic swell you’re looking for while also increasing blood flow, bettering your workout, and reducing fatigue.

One improvement we’d love to see in Altius is increasing the Alpha-GPC dosage to 600 mg, which may help the focus aspect of the pre workout. The addition of L-Tyrosine could also help boost the focus-enhancing effects of this pre workout.

Still, overall we love the blend of ingredients 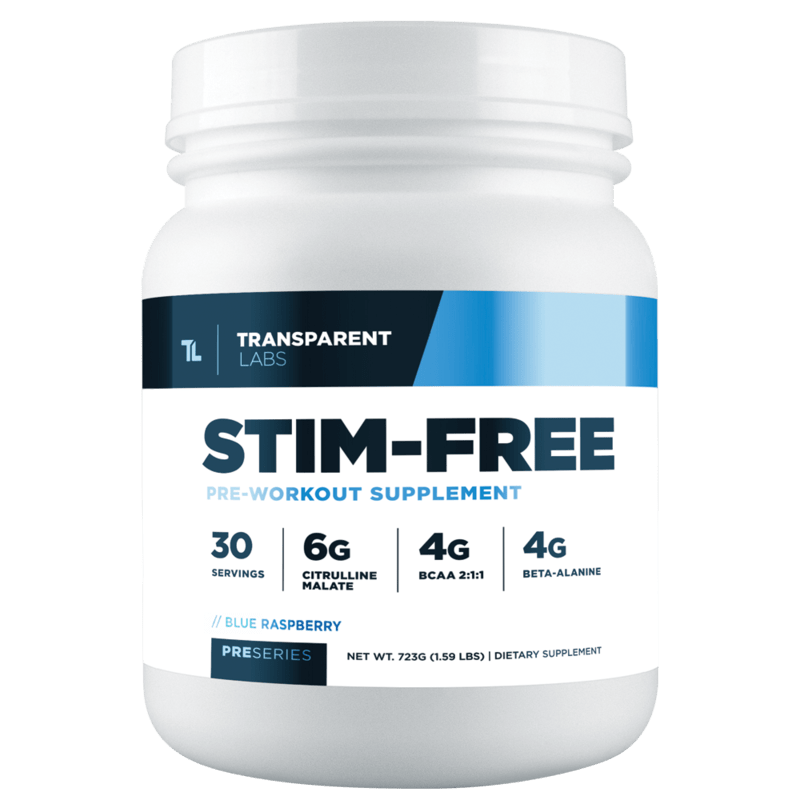 All the bases are covered here, including pump ingredients, BCAAs, and elevATP to replenish your muscles' energy stores.

If you want a solid pre workout, but without any caffeine, this is a good pick.

If you don’t want caffeine in your pre-workout, you should look for one that contains creatine. Researchers have long shown that creatine helps your muscles produce energy, but caffeine may blunt its response, making it near useless in many pre-workout formulas.

Transparent Labs Stim-Free pre-workout includes creatine without caffeine and adds in Taurine to improve focus and recovery times. With clinically effective amounts of each ingredient, nothing goes to waste in this pre-workout option. 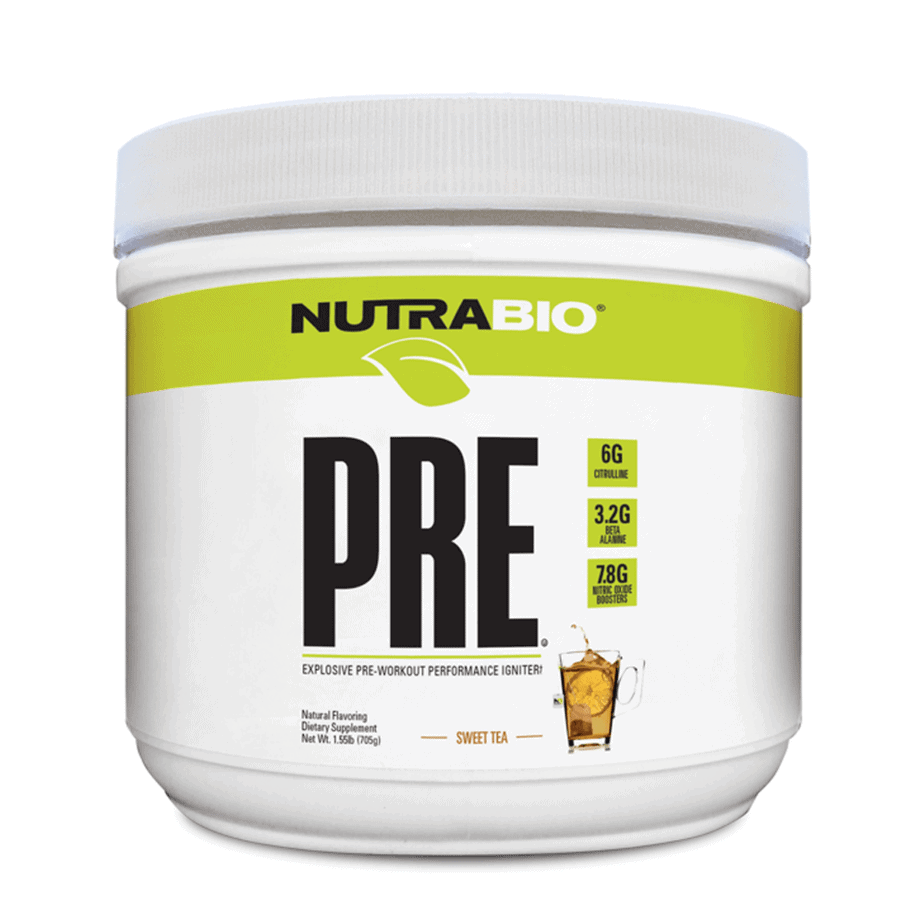 NutraBio delivers a stacked pre workout with its Pre. Coming in at over 30 grams per scoop, it has a full energy, pump, BCAA, and hydration formula.

Caffeine: 350 mg
Shop Nutri Cartel
Lift Vault earns a commission if you click this link and make a purchase at no extra cost to you.

NutraBio’s All Natural Pre-Workout provides two types of natural caffeine to keep you going without any jittery feelings.

On top of that, it features Agmatine Sulfate and Nitrosigine, which act as vasodilators and give your muscles that extra swell. With their added hydration optimizer, you should feel good throughout your workout.

One downside to this pre workout is that it contains 5 grams of raw cane sugar, which is quite a bit of sugar in a 35 gram serving. So yes, the sugar is natural, but it’s still quite a bit.

Artificial sweeteners have a negative reputation in some circles, but they’re not without benefit.

Artificial sweeteners often have zero or negligible amounts of calories which makes them incredibly useful in some situations.

They may be the only safe option for people with certain health conditions, like diabetes. And, it’s important to remember that the FDA and other government regulatory agencies consider them safe, at least in small amounts.

That said, there are several valid reasons to avoid them in your pre-workout. Though most of the evidence below comes from animal studies, and most of them surround aspartame rather than newer artificial options, it’s good to be aware of possible artificial sweetener side effects.

Researchers have recently linked aspartame to behavioral and cognitive issues like learning problems, headaches, seizures, and mood issues. It’s thought that aspartame raises phenylalanine and aspartic acid in the brain. These compounds then go on to inhibit neurotransmitters like dopamine and serotonin.

Other artificial sweeteners don’t raise phenylalanine or aspartic acid and may not trigger the same neurologic problems.

Still, many prefer a conservative approach. Since other artificial sweeteners have not been studied as much as aspartame, many choose to avoid them just in case.

Long-term use of artificial sweeteners in rats shows an increase in free radicals, which leads to oxidative stress. Though they haven’t shown this in humans, it may be cause for concern.

When free radicals build up faster than our bodies can clear them, we enter a state of oxidative stress. In this state, our cells are prone to damage that impair or negate enzymatic processes.

Oxidative stress is linked to several degenerative and chronic diseases. It also speeds up the body’s aging processes.

When we consume sugar, we trigger the release of chemicals in our brain that researchers refer to as the food reward pathway.

Artificial sugars don’t have enough calories to activate the pathway in full and may cause increased sugar cravings as a result. This could lead to eating more sugar, which may cause weight gain.

Some studies support this idea, and others negate it. Still, many choose to avoid artificial sweeteners in everyday products to help limit later sugar cravings.

Types of Artificial Sweeteners in Pre-Workouts

There are several different types of artificial sweeteners commonly found in pre-workout drinks. Below we detail the possible pros and cons of each.

Aspartame, also marketed as NutraSweet or Equal, is approximately 200 times sweeter than sugar. Researchers created it in 1965, and the FDA approved it in 1981, which means there are over four decades of studies on it.

Aspartame is very low calorie, and though it isn’t heat-stable and doesn’t work well in baked goods, it often shows up in sweet beverages, like diet sodas and pre-workout mixes. In terms of taste, it’s very close to sugar with a minimal bitter aftertaste.

This synthetic ingredient comes from two naturally occurring amino acids: phenylalanine and aspartic acid. Our bodies break it down to methanol, which isn’t toxic except in large amounts.

Methanol does break down further into formaldehyde, a toxic carcinogen, but we usually consume such small amounts of aspartame that it’s not a problem. Still, studies on aspartame show cause for concern. It’s linked to headaches, mood disorders and is a possible seizure trigger.

Sucralose is a zero-calorie artificial sweetener discovered by a British scientist in 1976. They replaced the hydrogen and oxygen bonds in sugar with chlorine, creating a substance that ranges from 200 to 400 times sweeter than sugar.

Today, its most popular form is Splenda, a mix of sucralose, glucose, and maltodextrin. People love it in baked goods and sweet beverages because it doesn’t have any bitter aftertaste. It’s also one of the most common sweeteners in pre-workout drinks.

There are questions and possible concerns about baking with Splenda because it may react under heat. Of course, in pre-workout drinks, heat stability isn’t a requirement.

However, some recent rat studies suggest Splenda may have adverse effects on good gut bacteria. It also may have some unwanted effects on metabolism, and long-term effects are still unclear. For those reasons, many choose to steer clear of sucralose.

Saccharine, which you may know as Sweet N’ Low, is 300 to 400 times sweeter than sugar and was first produced in 1879 but wasn’t mass marketed until the sugar shortages of WWI.

Many people use saccharine-sweetened products because they’re safe for diabetics and better for dental health. Saccharine’s made in a lab by oxidizing o-toluene sulfonamide or phthalic anhydride. Our bodies can’t process it, so though it tastes sweet, saccharine leaves our systems completely unchanged.

There’s broad consensus that saccharine is safe today, but in the 1970’s it was linked to bladder cancer in rats. More recent observational studies in humans don’t support that finding, but to be on the safe side, many still choose to avoid saccharine.

Stevia is a plant-based alternative to sugar, which means it’s natural. However, Stevia is still heavily processed and can have side effects.

Though Stevia in plant form has been used for centuries in some regions of the world, its processed state often combines Stevia with sugar alcohols.

Sugar alcohols can cause adverse digestive effects. Plus, researchers have concerns that long-term use of a nonnutritive sweetener, like Splenda, could have unwanted metabolic impacts that would be difficult to pick up on any standardized test.

That said, out of all the artificial sweeteners on this list, Stevia arguably has the lowest risk of any adverse side effects. So, if you decide you want a pre-workout sweetened without sugar, one with Stevia might be best.

All pre-workouts on this list will give you the strength, power, and endurance you need to get through your gym sessions, but only one of them comes with enough caffeine to feel like a traditional pre-workout option: Jacked Factory’s Altius.

Regardless, you won’t have to deal with any negative effects artificial sweeteners may have on your long-term health. That way, you can keep up in the gym for many years to come.

What are the most common artificial sweeteners found in pre-workout supplements?

Some of the most common artificial sweeteners included in pre-workout supplements are sucralose, aspartame, and saccharine.

There is some debate on whether stevia is a natural or artificial sweetener. For our list, we did include pre-workout supplements with stevia. The next FAQ details the nuance of stevia’s status as a natural sweetener.

In its raw form, stevia is a natural sweetener. However, when it is included in food and supplements it can undergo various levels of processing that can make it more artificial.

Of these, the “most natural” is organic whole leaf stevia. This is unadulterated stevia, presenting the ingredient the same way it appears in nature. It can be a little earthy and bitter in taste, in addition to sweet.

Stevia extract, which is typically what is used in pre-workout supplements, is a concentrated version of whole leaf stevia. This extraction process means the stevia becomes processed. This is not necessarily a bad thing – lots of reasonable food is processed. Where it gets tricky is the fact that this stevia extract could include preservatives and other additives. Common additions include maltodextrin, which has a high glycemic index and may be unhealthy in large doses, especially for diabetics.

The least natural form of Stevia includes patented versions like Truvia and Stevia in the Raw. These include a heavily processed version of stevia known as Reb-A. This includes erythritol and dextrin, which are sugar alcohols and glucose, respectively.