Loaded is a pre-workout supplement from Ryse Up Supplements. Features include 4.5 g L-Citrulline, 3.5 g Beta-Alanine, 440 mg total caffeine from two different sources, and 100 mg Theobromine. Loaded by Ryse is a high-energy pre-workout.

I would easily recommend this for beginners. The energy is good enough, with sufficient focus and pumps to benefit a beginner. Paired with the licensed, well-known, and incredible flavors, a beginner would not have any trouble with this product as long as they can handle the initial 350 mg of caffeine.

Read on for additional details of my experience, the best prices for the Loaded pre-workout, and a breakdown of its ingredient label. 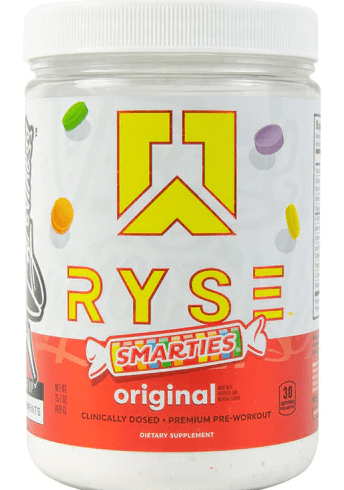 Loaded by Ryse Up Supplements Pre-Workout
39.99

Loaded pre-workout by Ryse Up Supplements is a high-energy, great-tasting pre-workout that has enough for beginners without being overly strong. Loaded is garnered and formulated for a mass audience to use as a stepping-stone into pre-workouts.

L-Citrulline: 4,500 mg
Beta-Alanine: 3,500 mg
Caffeine Anhydrous: 350 mg
Shop Nutri Cartel
Lift Vault earns a commission if you click this link and make a purchase at no extra cost to you.

You can buy Loaded by Ryse Up Supplements at the following retailers:

Every time,the energy was enough for a 3+ hour-long workout and to sustain me for my typical 12-hour shift at work. It gave me just enough focus without the need for more caffeine.

The main aspects of this product are energy and focus.

Within 7 minutes of ingesting, I felt the Beta-Alanine tingles begin. The itches weren’t as intense without a digestive aid, but I still felt them. I’d rate it a 7.5 out of 10 for intensity. The tingles will probably be intense for beginners.

Within 10-12 minutes, the energy became apparent, and although it escalates and feels as though it has no ceiling, it smooths and mellows out without jitters after a while.

Soon after, the energy became  light and a tunnel-vision focus began. The focus lasted the entirety of the workout and almost all of my day job.

Pumps were apparent but not very strong. No adverse effects were noted at all.

Smarties is an incredible flavor. Using just 10 oz of water, it’s not overly sweet and tastes like powdered and liquefied Smarties candies. It had a very light chalkiness (like you’d get from the candy). Out of 10, I’d give it a 10.

Ring Pop is very sweet; after the first time I tried it, I had to use 16-20 oz of water to tone down the sweetness. Honestly, Ring Pop tastes like liquified cherry Ring Pop candy; out of 10, I’d give it a 9.75 (the only knock is the need for more water).

There are two other flavors with the same formula, “Freedom Rocks” and Tigers Blood.

Depending on the flavor, a whole serving is either 14 grams or 14.3-grams. Luckily, both are just slightly under a flat scoop.

Sodium can assist with several different functions while working out, including delivering massive pumps and increasing creatine uptake in muscles.

Depending on the flavor, the amount of sodium will differentiate between 140 and 190 mg.

The minimum dose for pure L-Citrulline is four grams, which Ryse Loaded pre-workout gives, and then some.

Beta-alanine has been shown to support muscular endurance and can act as a lactic acid buffer.

3 to 4 grams is the recommended daily dosage for beta-alanine, putting Ryse Loaded in the middle of that range.

Choline is a focus ingredient and is a chlorogenic source. Compared with Alpha GPC, choline bitartrate may not be as effective as a nootropic (source). This is another potential area of improvement for the product formula.

Doses usually range between 500 and 2,000 mg, putting Ryse Loaded just within the range.

Caffeine needs no introduction, but it’s one of the most researched sports supplements. Most fat burners will range between 175 mg (as with the great M2) and 600 mg (as with the smoothest Hooligan).

Typically, pre-workouts range from 250 to 450 mg, and the addition of 90 mg caffeine from zumXR ® puts Ryse Loaded at 440 mg total caffeine, which for beginners, is on the higher side.

zumXR ® is another ingredient that is not typically found in pre-workout supplements. Like di-caffeine malate, which is more commonly seen, zumXR is an extended-release version of caffeine, which helps offset the crash effects of caffeine anhydrous and extends the energizing effects.

This would put the total amount of caffeine in Ryse Loaded at 440 mg, which is a hefty dosage.

Theobromine is a stimulant that is a “caffeine light” ingredient found in chocolate, some tea plants, and the Kola Nut. Its name means “Food of the Gods.” Greek “theo” means gods and “broma” means food.

L-Theanine is a sedating amino acid that promotes relaxation and takes the edge off caffeine to prevent a crash. Luckily, the 50 mg included in Ryse Loaded does not take away the energy.

Vincamine is the main ingredient and alkaloid of the lesser periwinkle plant, Vinca minor – a common garden plant.

According to Science Direct, although increased cerebral blood flow has been reported after the intravenous administration of vincamine, there have been no reliable studies of blood flow after oral medication. Improvement in scores on some psychometric tests have been obtained with vincamine in some patients with cerebrovascular disease. No clear-cut practical benefit has been demonstrated.

It has been used for over two decades in certain European countries (e.g., Hungary, Germany, and Poland) and Japan to treat cerebrovascular disease states and associated dementia.

If you attempt to find research on “Thinkamine ™”, the only results you’ll find are trademark information.

It’s not known what the required dose is to experience benefits.

Loaded by Ryse Up Supplements Pre-Workout
39.99

Loaded pre-workout by Ryse Up Supplements is a high-energy, great-tasting pre-workout that has enough for beginners without being overly strong. Loaded is garnered and formulated for a mass audience to use as a stepping-stone into pre-workouts.

L-Citrulline: 4,500 mg
Beta-Alanine: 3,500 mg
Caffeine Anhydrous: 350 mg
Shop Nutri Cartel
Lift Vault earns a commission if you click this link and make a purchase at no extra cost to you.

Loaded by Ryse Up Supplements Pre-Workout

Loaded pre-workout by Ryse Up Supplements is a high-energy, great-tasting pre-workout that has enough for beginners without being overly strong. Loaded is garnered and formulated for a mass audience to use as a stepping-stone into pre-workouts. Compared to GNC, Vitamin Shoppe, and Wal-Mart varieties of pre-workouts, I’d rank Ryse Loaded highly.