Strong Lifts is a cornerstone beginner strength 5x5 workout program based upon Bill Starr’s old school 5x5 program. If you’re just starting out, this is a fantastic way to build muscle, lose fat, and get stronger. Using Google Spreadsheets, the program becomes even easier to follow along. LB and KG versions are included below.

StrongLifts 5x5 is a beginner strength program based on linear periodization. There is very little variation within the program in terms of exercise selection; the primary purpose is to gradually increase the weight lifted each workout for all lifts. This allows the novice athlete to make rapid improvements in strength and muscle growth.

The program utilizes compound movements to work multiple muscles at once. This allows a full body workout while only doing a few exercises per training session.

The program has three training sessions per week comprised of “workout A” and “workout B.” We’ll get into the details below.

The squat is one of the “big three” compound exercises (the other two are the bench press and deadlift). It’s one of the best lower body exercises available and also works the back and abdominal muscles.

You will be squatting 3 times every week on StrongLifts.

The bench press is one of the best exercises to work the chest muscles, but it also works the triceps, front delts, and biceps. It is known as a “push” movement and helps work the opposite muscles as the barbell row (in a very basic, over-simplified sense).

You will be benching once or twice every week, depending on the week.

The deadlift is one of the best exercises for the posterior chain, which consists of your spinal erectors, hamstrings, and glutes. It also hits your upper back as well, helping develop the “traps” in the upper back.

You will be deadlifting once or twice every week, depending on the week.

The barbell row is a great exercise for the lats, traps, rear delts, and core. It is known as a “pull” movement.

You will be rowing once or twice every week on the days you do not deadlift. This is explained more later.

The overhead press is a highly effective exercise for building strong shoulders while also working the triceps and using the core for stabilization.

You will be overhead pressing once or twice every week – on the days you are not bench pressing.

Workout A consists of:

Workout B consists of:

You will complete workout A and workout B in alternating fashion.

Yes, StrongLifts is an effective strength training program for novices. It’s based on sound principles of stress, recovery, and adaptation. Because the novice lifter is able to both be stressed easily (since they are assumed to have never engaged in a serious strength training program before) as well as recovery rapidly, they have the ability to gain strength quickly. Strong Lifts, as well as programs like Starting Strength and GreySkull LP, all take advantage of this.

Yes, StrongLifts will build muscle in novice lifters. Sets of 5 can build strength and induce hypertrophy in the novice lifter.

How long should you run StrongLifts?

StrongLifts should be run for as long as progress can be made on it.

What happens when I stall on StrongLifts?

When the lifter begins to fail reps in their 5x5 sets, they should keep the weight the same, switch to a 5 sets of 3 reps, and then continue to add weight from workout to workout. So if a lifter misses a squat rep at 300 lbs, they should end their workout and do 5 sets of 3 reps at 300 lbs in their next workout. Assuming this is achieved (and it should be, assuming the athlete was able to lift 295 for 5 sets of 5), they will do 5 sets of 3 reps at 305 lbs in their next training session. You only need to do this for the lifts you’ve plateaued on. Other lifts can stay on the 5x5 scheme.

Afters plateauing on 5 sets of 3 reps, you can move to 5 sets of singles or start using different rep schemes for the first, second, and third training session each week. This is a bit outside of the scope of this answer, but this is handled for you automatically by GZCLP, so switching to that program after plateauing on 5 sets of 3 reps would likely be a good switch to keep the gains rolling and introduce more periodization in your programming. Texas Method would also be a good program to graduate to after Strong Lifts. Greg Nuckols writes in much greater depth on this very subject.

Get the Apps for Android and iOS

How to do the Exercises

Below you’ll see how to do all of the exercises needed for the full StrongLifts 5x5 program. There are a lot of videos down there, but in my personal experience I’ve found watching a few videos to be an essential part in learning the lifts. Each video emphasizes something slightly different, which helps me identify what I might need to improve in my own lifting form.

Remember to start light and get comfortable with form first. If you want to lift big weights, proper form is the way. Shortcuts keep you weak at best and get you hurt at worst.

How To Squat With Perfect Form

How To Squat: Low Bar

How to Bench Press

How To Get A Huge Bench Press with Perfect Technique

How to Barbell Row

How To Barbell Row

How to Overhead Press

"How To" OVERHEAD PRESS

Teaching the Deadlift on a First Timer 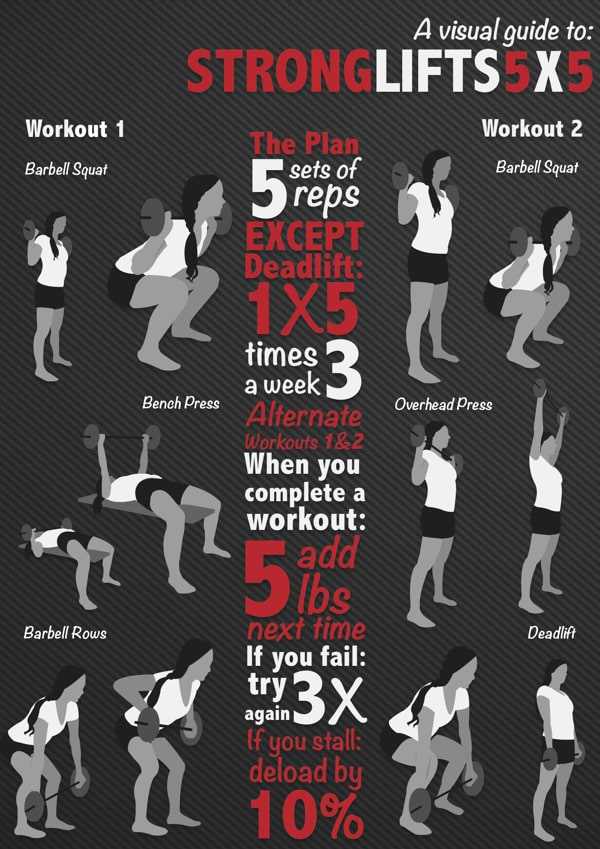